Hello! This year was our 4th year walking for Choc! We had a blast as always!
Our team is no longer known as Team Neverlanders SC.
We are officially known as Neverlanders Social Charity.
I made a short video of our walk just to show a little of what goes on every year. I love my team they are dedicated and fun and together we have raised a little over 16,000 in four years!! Hope you enjoy this video!

Posted by Unknown at 7:07 PM No comments:

On Saturday, September 5 TeamNeverlandersSC put on a cookout and kickball game to raise money for the Choc Walk taking place at Disneyland on October 11.  The day was a huge success, we raised
$500 for a good cause.  We will continue to have events and auctions from now until the walk.  Follow TeamNeverlandersSC on IG for all the info.  Here are a few photos from the event.  A huge thank you goes out to Neverlanders Rosemary and Jimmy who organized the event. 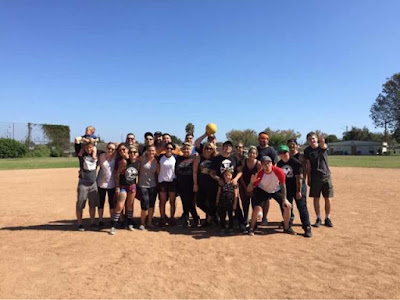 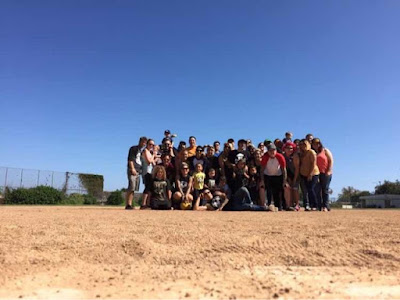 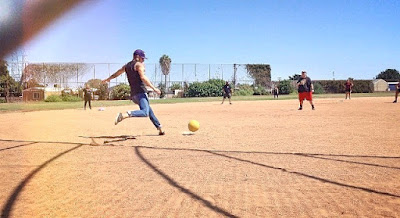 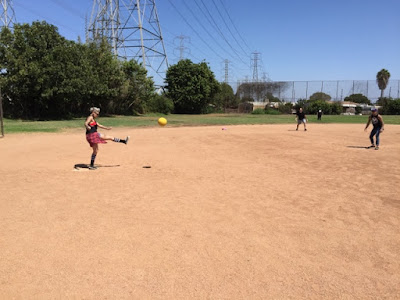 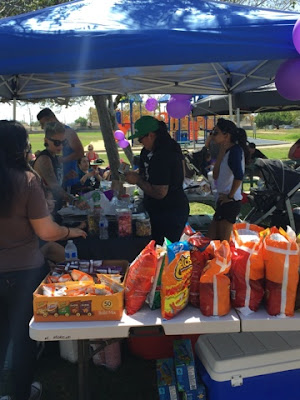 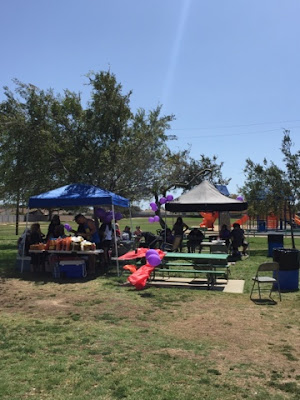 Posted by Unknown at 2:01 PM No comments:

Sorry we have not posted on the blog lately, we've been having too much fun in Neverland. Stay tuned for new blog entries coming soon.
Posted by Unknown at 5:17 PM No comments:

In October we were interviewed for a magazine called Vice. The author of the article hung out with us and interviwed memebers of our club. Last month a photographer for Vice hung out with us during our meet and took a lot of pictures for the article. We have been waiting for this article since October and it has finally been released. Its a good read and gives you an insight about us and social clubs in general. We are not a Disney gang we are a Social Club and we love and enjoy Disney as a big family. Hope you enjoy the article and feel free to leave comments! 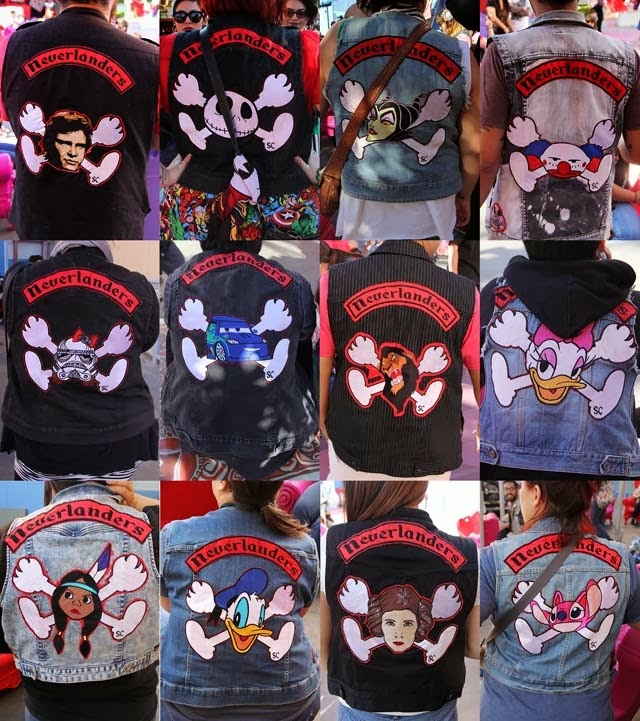 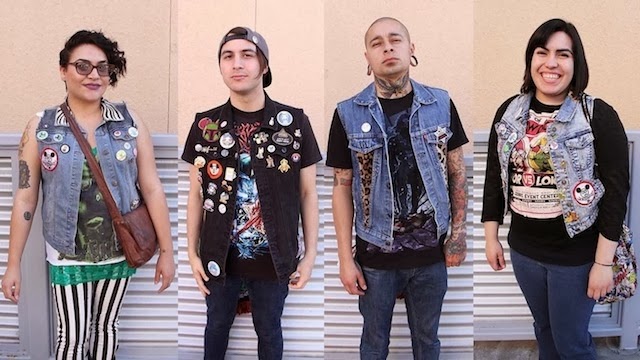 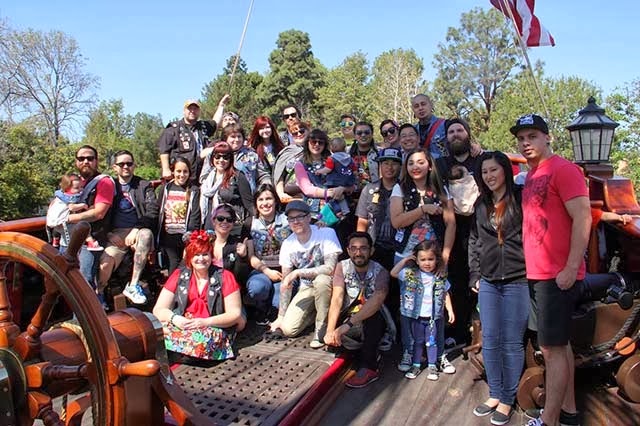 On Sunday March 2, 2014 the Neverlanders and some special friend had an 80s themed 30th birthday party for co-founder Cyndee Mendoza. A special thanks to Jessie for the venue and also Vero who helped Jessie put the whole event together. 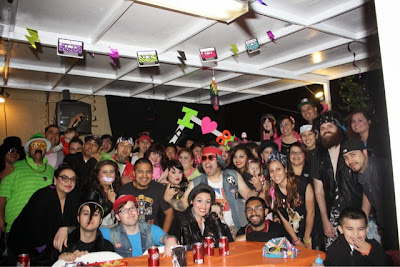 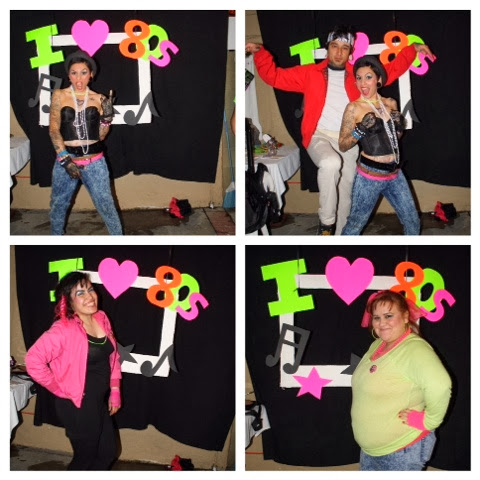 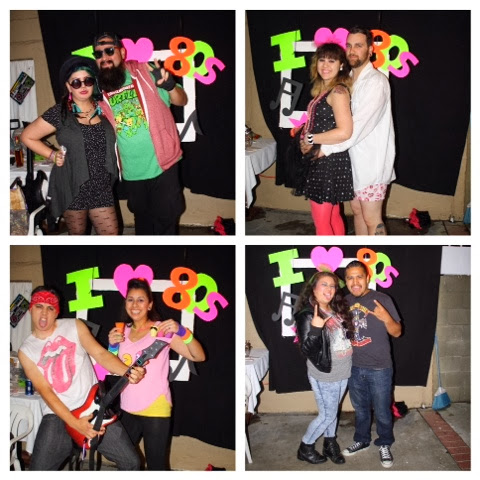 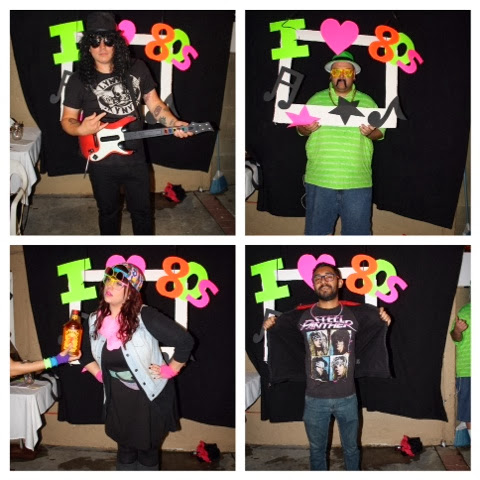 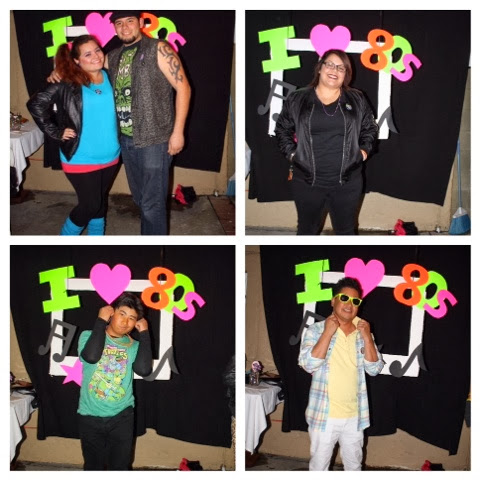 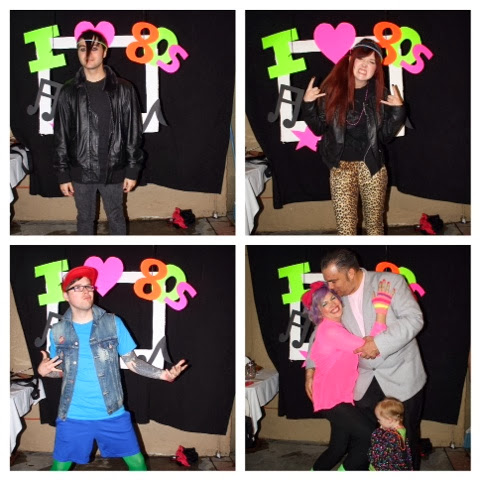 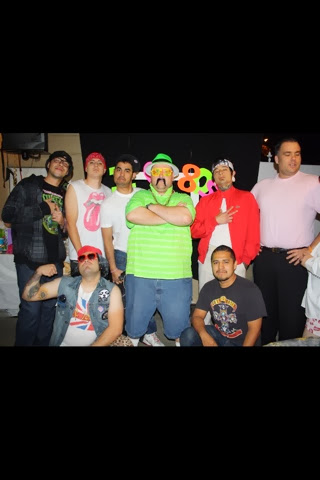 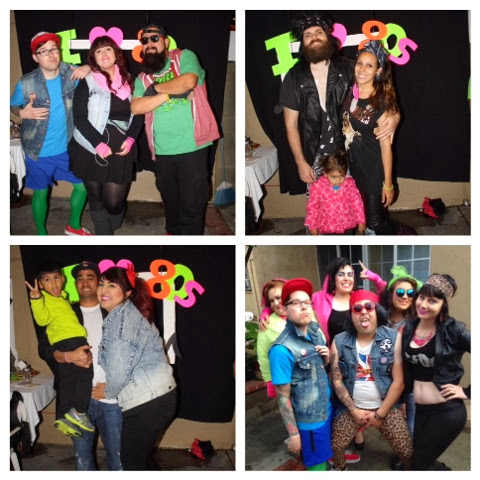 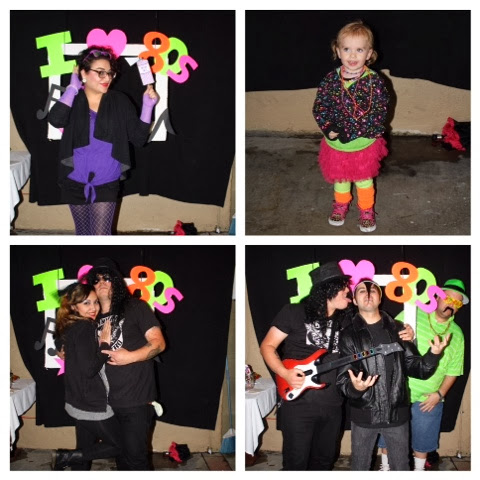 It was an amazing party and Cyndee was very surprised.  Everyone was honored to be there and we all hope we made her birthday memorable. For even more photos check out #cyndees80sbash on Instagram. 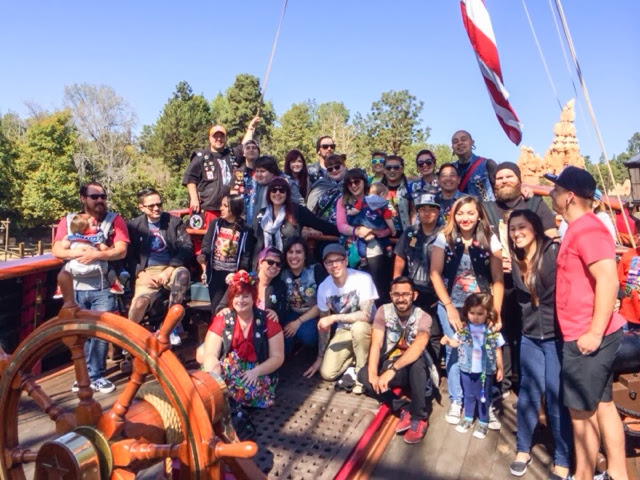 February's adult meet took place on Sunday the 23rd. It was also Dapper Day at Disneyland. We decided not to dress dapper and wear our favorite Marvel t-shirts.  I think Captain America was the most popular shirt in the group.  We had 5 guests for this meet.  Josh, Britney, Morgan, Paige, and Franklin.  The park was really busy but we still had a great meet.  This months itinerary was done by Anthony.

The most important news on the day came to a surprise to most of us.  Two of our member, Paul and Justice, are expecting their first child.  Congrats to the first time parents and we all can't wait for our newest Neverlander to arrive. 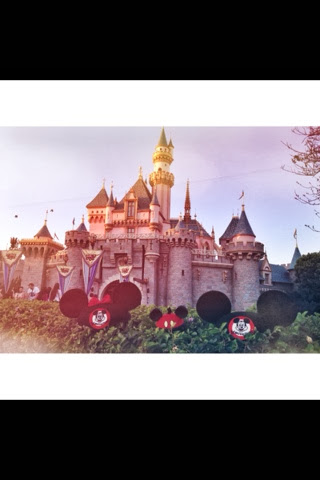 The canoes were not on our itinerary but we were ahead of schedule so we decided to do them.  Its the second time we have done them as a group and I have to admit its really fun. 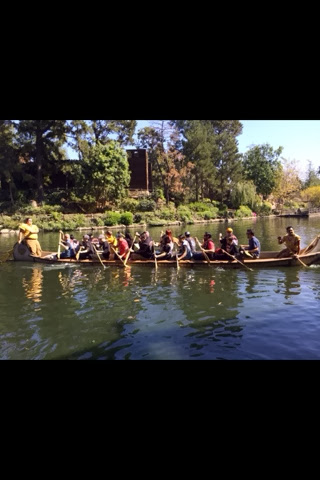 Our original plan was to do Soarin' but the wait was 80 minutes and as soon as we got in line the ride broke down so we decided to do Grizzly River Rapids instead. 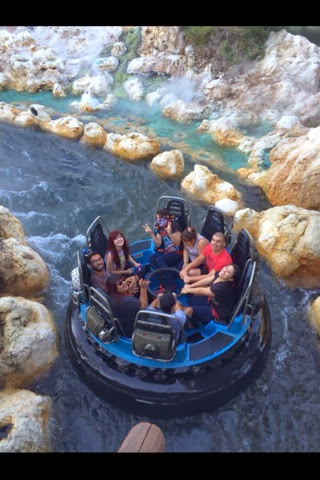 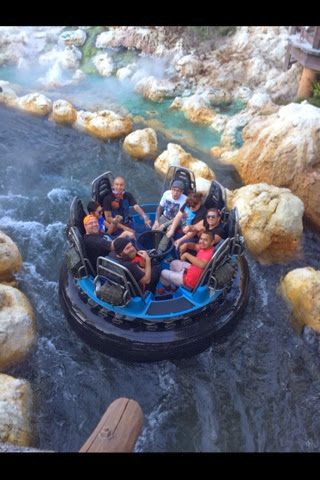 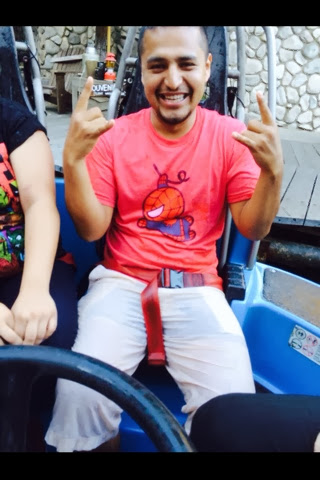 Adrian decided that white shorts and dark undies was a good idea. 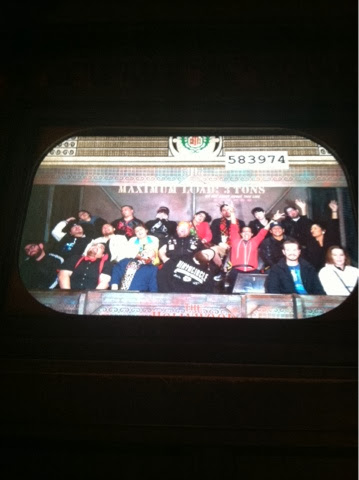 The last ride of the night was Tower of Terror.

It was another amazing meet for the Neverlanders Social Club.  If you want to see more photos from the meet follow our hashtag #neverlanderssc.  Can't wait to see what next month has in store for us.

Farewell to the Hillbillies

Walt said "Disneyland will never be completed.  It will continue to grow as long as there is imagination left in the world." The Main Street Flower Mart, Skyway, People Movers, America Sings, Country Bear Jamboree and as of January 6, 2014 Billy Hill and the Hillbillies.  Just some of the acts and attractions that are no longer at Disneyland.


They began performing in the late 80s as various named bands.  One of which was the Barley Brothers during the Disneyland State Fair in 1988. They also performed during the opening of Critter Country on Wednesday, November, 23, 1988.


On Wednesday, August, 5, 1992 Billy Hill and the Hillbillies was officially formed and began performing in the Golden Horshoe Saloon. They had their official "scripted" show on Sunday, December, 18, 1994.  The original members were Kirk Wall(guitar, fiddle, lead), Mario Hildago(banjo), Dennis Fetchet(fiddle), and the founder of the band John Marshall(bass).  Other members of the band have and are Evan Marshall(mandolin), Rick Storey(banjo & guitar), Anders Swanson(bass & fiddle), Duane Michaels(mandolin & fiddle), John David(guitar & banjo), John Eaden(guitar & lead).


Billy Hill and the Hillbillies have been know for decades for their bluegrass/country music along with classic rock, rap and holiday music.  And of course their comedy.  They even put out an album titles The Billys Live.


I am sure going to miss those hillbillies.  The Neverlanders saw the band during our first meet.  Like most people I would see them every once in a while but never as much as I should have.  I know for the rest of my life anytime I hear Grandmas Killer Fruitcake I will think of them.